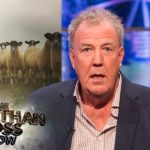 Jeremy Purchased his sheep earlier in August this year. A few months ago Jeremy Clarkson was at the Shearwell Thame Summer Sheep Fair with a film crew. At the fair he bought 78 so called North of England Mule shearlings. In the Autumn they were brought to his farm by ... END_OF_DOCUMENT_TOKEN_TO_BE_REPLACED