Home / Other Shows / James May looks petrified as he meets giant robot.

James May looks petrified as he meets giant robot.

James May has dealt with some difficult machinery in his day. Thanks to The Grand Tour (we’re not talking Jeremy Clarkson)… but he may have met his match in new series, Our Man in Japan.

The TV presenter heads over to the tech-savvy country and learns a thing or two in the first look clip. Which sees him tackle life as an actual robot. Meeting up with a scientist who created the device, which is essentially a pod on legs.  James got a very unreassuring giggle when he asked: ‘Are you mad?!’ But while he might be used to being in the driver’s seat normally. It turns out the 56-year-old isn’t a massive fan of being in a robot control centre.

Walking it around a car park centre, they’re also not very fast. ‘It’s exactly what a robot should be,’ he then told him… but the best is yet to come. Urged to follow the scientist around the corner into a new garage, James looks horrified as he’s confronted with a giant robot that looks suspiciously like a real-life transformer. 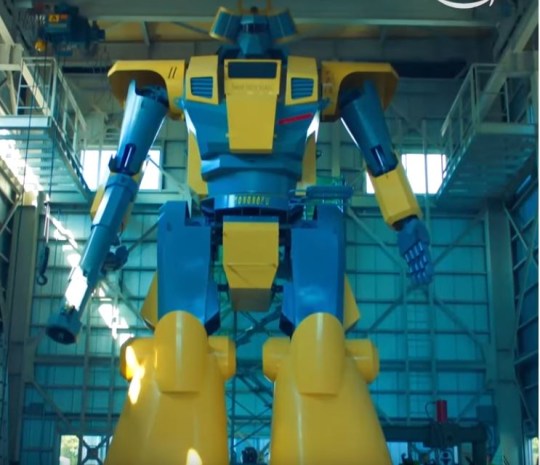 With a blue and yellow that bright, Michael Bay would be proud and Optimus Prime would be shaking in his boots. Clearly horrified, James answered his own questions by declaring: ‘He is mad!’ This is only the start of the start’s adventures though – considering that he’s off on an six-episode trip around Japan.

James May: Our Man in Japan airs 3 January on Amazon Prime Video.