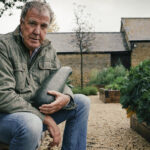 Jeremy Clarkson has annouced a second season of his new show Clarkson’s Farm. All fans are happy to know that Andy Wilman is the producer of the film. The same Andy Wilman who, from 2002 to 2015, created Top Gear for us, and then the Grand Tour. The continuation of ... END_OF_DOCUMENT_TOKEN_TO_BE_REPLACED